Meet Aarti Prabhakar Mhatre, a 29 year old Commerce Post Graduate, Rather than complaining about her plight, Aarti chose to address each of these situations by choosing to learn, study further, undertaking trainings, improvising and narrowing the scope of any prospective employer to find a reason to say ‘No’ to her being recruited. It hasn’t been easy though.

Aarti is unlike most other young job aspirants, each trying to find a place for herself/himself under the sun. Aarti has cerebral palsy, a disability which has impaired her speech and she has a difficulty while using her fine motor skills. (e.g. holding a pen or dialing on a cell phone keyboard). She has to work hard to maintain her body balance while walking, sitting or standing.

She was identified 3 years ago by Cheshire Home’s livelihood project in Mumbai. Aarti lives with her parents, a younger sister and a brother in Thane Mumbai city. She is grateful to have been brought up in a supportive family environment, was always encouraged by them in everything she wanted to undertake, right from education to securing a job.

But Aarti had to work extremely hard to prove herself. Having completed her graduation in commerce, Aarti had wanted to work, but found it challenging to get one despite several attempts. At this point she was very disheartened and this was when she was introduced to the Cheshire homes livelihood project.

Aarti was encouraged to attend the ongoing life skills training of Cheshire Home in Thane Mumbai, every weekend. Without realizing, attending these sessions became a habit for her, and over the next few months she came regularly without missing a session. As envisaged, these sessions not only brought her out of her ‘low’ self, but brought into her a new energy, confidence and a renewed self belief, as she was spending time fruitfully with co-participants with disability who too were on their way to finding place under the sky.

In the mean time the project went on to support Aarti in attending and facing job interviews, it was evident that her profound disability was a barrier, and all she wanted was that ‘one chance’. The project enabled her to secure certification courses computers and subsequently computerized accounting as well. While at the same time project staff did all they could do to ensure that she pursued her post graduation as well, which she completed successfully. All this while Aarti continued to participate in life skills sessions attending to job interviews facilitated by Cheshire Home. She would not miss a any opportunity to attend/participate in events and activities along with the other youth with disabilities, conducted and facilitated by Cheshire Home. It may be recalled here that Aarti has profound disability.

“You are over qualified, and overage and we are not sure if you would be able to travel all the way to this place is a good few kilometers from where you live” said one of the trainers at an organization wherein Aarti was referred to and accompanied by the project staff for a screening to undertake training in retail sector preparedness.“Would you be able to find a job for her?” asked this trainer to Cheshire Home livelihood project staff, with evident skeptism. This time, it was Aarti’s self belief and confidence that motivated the Cheshire Home staff to say “yes, all you need to do is allow her be part of this training”. All that Aarti wanted to do was, be part of her fellow youth/peers, and gain as much as possible from the focused life skills lessons, orientation to retail specific computer software/s, opportunity to communicate and improve her language skills.

Cheshire Home went on to facilitate a batch of retail training in Thane Mumbai itself, where Aarti stays with her family, Aarti was not to be merely a part of the training, but was to be the most regular, and perhaps the best performer in theory as well as practical.

Aarti was the first to get recruited in her batch, and was offered a job profile i.e. of clerical assistant considering her educational qualifications, with a starting salary of Rs.8000/- per month. This was with a Mumbai based trading company, importers and exclusive distributors of creative and designer of glassware from Europe and Asia.

For Aarti this was to be the “One Chance”, like for any debutant selected into the national cricket squad, representing the country, and give the best possible performance. It took less than 3 months for Aarti to demonstrate her ability, knowledge and skills. She got an unprecedented transfer to the finer sale department, with a raise in salary, which was now Rs.9,000/-per month. While the life continues to smile at Aarti, who, with sheer hard work, work discipline, self motivation and integrity earned her what she truly deserves. As an added benefit (as an exception), the employer also reimburses the cost of travel including the cab (which is substantially expensive), from the nearest railway station to the office and back, in an attempt to make it convenient for Aarti and two of her colleagues with disability

It might appear to be a fairy tale, but it has taken several years of persistence, perseverance and determination, which only Aarti and her supportive family know what they have been through, for this ‘One Chance’, despite innumerable rejections.

“When we recruited Aarti, there was a certain element of charity in our perception and attitude. But what we realize over a period of time is that she is very capable, like anyone of the employees here. I think she deserves what she has got, and much more” says Mr. Balkrishna Jhunjhunwala, the director of the firm, and goes on to say that he would be glad to recruit more members like Aarti into his team here.

"I am glad that my entire team is very supportive of Aarti, helping her transition smoothly into the new workplace” adds Mr. Jhunjhunwala.

“I thought (in the beginning) whether I would be able to do this (Job), considering that I had not travelled by (Suburban) train prior to this (Job), and I am glad that I do it alone every day. The colleagues here are very supportive, and I cannot express how much I love my job, and look forward to coming here (office) everyday.” Says Aarti with a smile while working on the desktop at her workstation, even as she names a two of her senior colleagues, who are mentoring her at workplace.

Mahesh is a 21 year old from Koppal district of Karnataka. His father works as a daily wage worker. His mother is a homemaker. He has a brother and a sister. Both are married. He met with an accident and could not move his right hand. He cannot lift his right-hand now. Because of this, he could not write properly at school. His friends and relatives used to make fun of him. After a lot of struggles and hurdles, he completed SSLC. He was not able to study further due to unfavorable financial conditions at home. 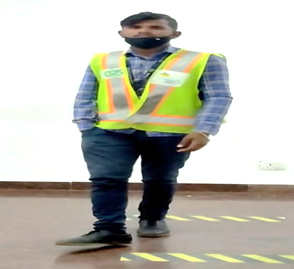 He was working in a mobile shop in his hometown. But his salary was low, and it was not paid on time either. He quit the job and he was at home for a year doing nothing.

After a year he started searching for a job. He attended many interviews, but he was rejected everywhere because of his disability. He was very depressed.

He came to know about Cheshire Disability Trust (CDT) through one of his friends. They suggested to him to undergo ITES training at the Devanahalli center. 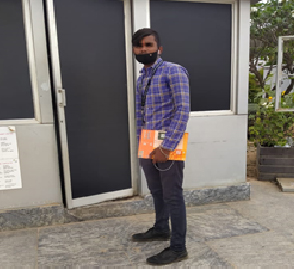 He enrolled for training and learnt the basics of computers, MS Office, and life skills such as staying positive, grooming, work ethics, etc… CDT also conducted sessions on interview preparation and held mock interviews. This training led him to get a job at Central Parking Services, Kempegowda International Airport, Devanahalli. He is working as an LSS / Parking Man in the “traffic area” and earning a salary of INR 11,795/- per month. He sends a part of his salary home and tells them he is safe and happy.

““Thanks to everyone who made my life happy, special thanks to CDT and Cognizant Foundation. People now see the ability in me! Thank you!” says Mahesh

Manoj K R is from a village called Thirthahalli in Shivamoga. He was born with impaired hearing. His father is a painter and mother works in a farm. He has two elder brothers and one elder sister. He completed his SSLC from Govt High School, Shivamoga. 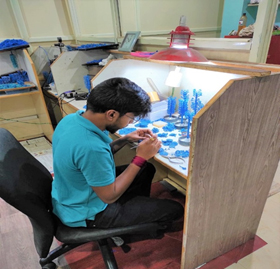 After completing his SSLC he joined Diploma at JSS polytechnic for differently abled persons. He completed his Diploma in Jewelry Design in 2020. He was very particular that he wanted a job in the same field. He did not get any opportunities though he searched extensively. CDT intervened at this stage and connected him with A5 fusion Jewelers. He got ITES training from CDT and the soft skill sessions helped him to improve his confidence.

After successfully completing training, he took part in the special recruitment drive organized for A5fusion jewelers and got selected for the post of “Process Trainee “ with a starting salary of Rs. 9900/-. He is one of the top performers three months after joining there. A5 fusion jewelers is so impressed with him that they now want to hire more hearing impaired candidates.

We have 17 cheshire homes all over India

These successful stories of PWD’s who have benefited from CDT assistance are shown here.